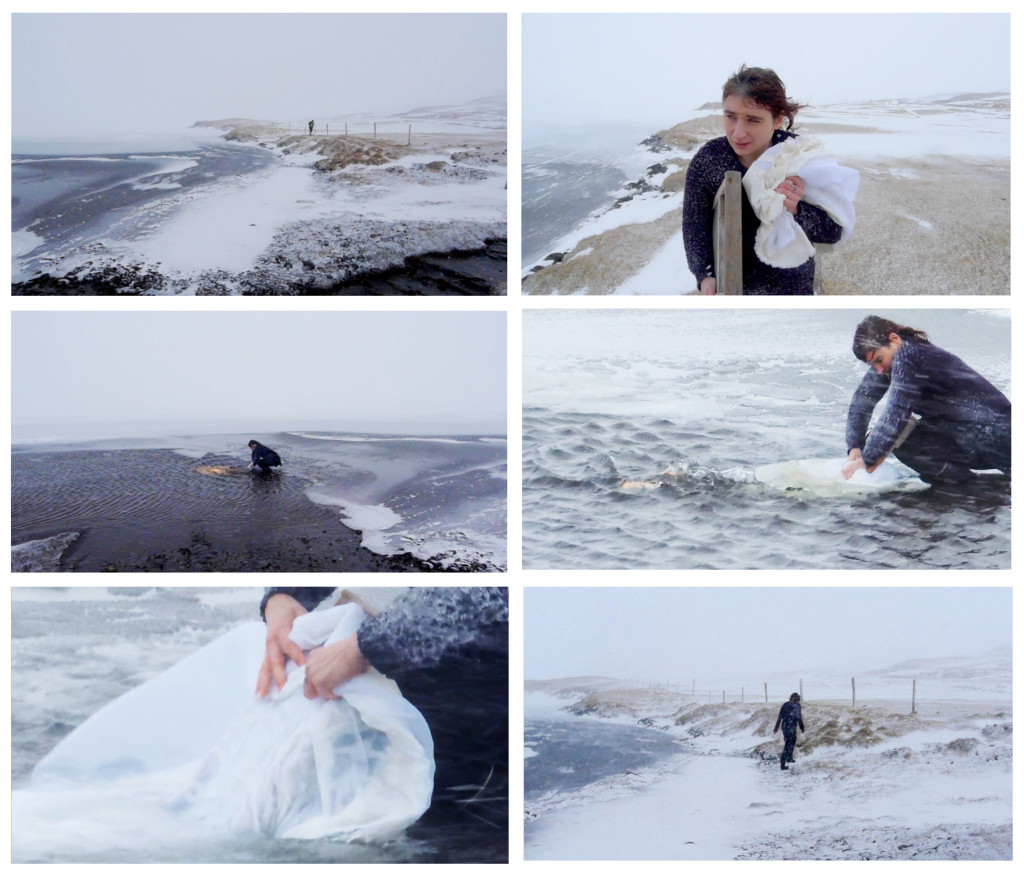 Taking out the dirty laundry (Video)

A raw landscape fades in. Somebody is walking. Close up: a woman is walking with a white cloth and a washing board under her arms. Wind is howling, snow is falling, it looks very cold.
The woman walks towards the frozen water. There is an open space with a light source near. She places her washing board into the source and sits down in the freezing water. She starts to wash the already white cloth in the light. Meanwhile, the snow turns into a blizzard.
The camera comes closer while she is furiously washing. Showing her skin, red from the cold, her hands getting stiff from the long exposure from the icy water and her clothes slowly turning white from the snow. She is cold, but keeps on washing with rigid determination. But then, after a while, she carefully spreads the cloth over the light source, places it gently and walks away. She shakes her arms, like she is trying to get rid of something. Then she walks back to where she came from.

Meaning & Making
Why fixing something that is not broken? It seems absurdist. Still the deed of washing a clean cloth is done with ridged determination. The phrase “taking out the dirty laundry implies that there is something dirty that needs to be exposed, that needs to be confessed. Confession often implies guilt. And guilt, unfortunately, is not easy to come clean with. Sometimes we lose the struggle with ourselves. And sometimes we have to admit that the only one standing in our way to continue our path is our self.

When I finished shooting the video I could not look at it at first. It touched something so close and painful that I could not bear to face it. Eventually I managed to get a clean cut and finished the movie.

During the shooting my camerawoman nearly fainted because of the cold. The blizzard was not planned and kept getting worse. The mandala did not unfold properly.
Despite the failing, I still like the piece. The original thought got a bit mutilated, but that’s what happens when you try to shape your dreams into reality. They mutate into creatures of their own.