It turns out that my labyrinths of thoughts contain a great treasure: an inhabitant!
He is called the Minotaur and he is part of me. We don’t know each other very well, but we like exploring the unknown, so that is a common place to start from. The unknown is sometimes dark, sometimes playful and most of all, very open and free.  It an be a quite terrifying place, so it is good to have the Minotaur as a companion. Together we travel to the unknown and back, using the scriptures of “the labyrinths of thoughts” as our map to get lost with.

Maybe I can tell you al little bit more about my travel companion.
The Minotaur had his ‘coming out’ in the performance “The Minotaur schizophrenia”. Since then he occasionally appears in my life. During these encounters I discover more about the nature of this creature.

Encounter #2: Metro Minotaur
One day,  the Minotaur and I took the metro together. The Minotaur carried a print with his image. Children seemed to like him and he liked them. Grown ups where less fond of him. Most of the time they ignored him and sometimes they where annoyed. It was during this trip that I found out that the Minotaur cannot speak, only trough images. 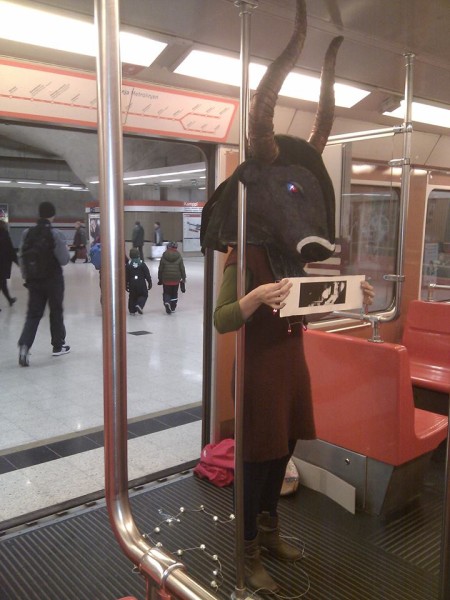 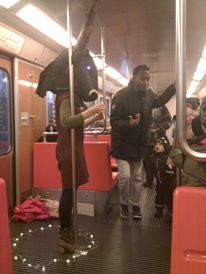 Encounter #3: Breakfast at Anja
In the performance “breakfast for two” with Anja Sauer, the Minotaur and I visit our friend Anja, who wanted to study him by capturing his image on her laptop. As you can see, his image is not always the same. During the visit he was wearing horns made out of paper. The Minotaur did not really know how this ‘visiting’ thing worked, but he tried his best. Unfortunately, it turned out that the Minotaur does not eat, which made having breakfast complicated. 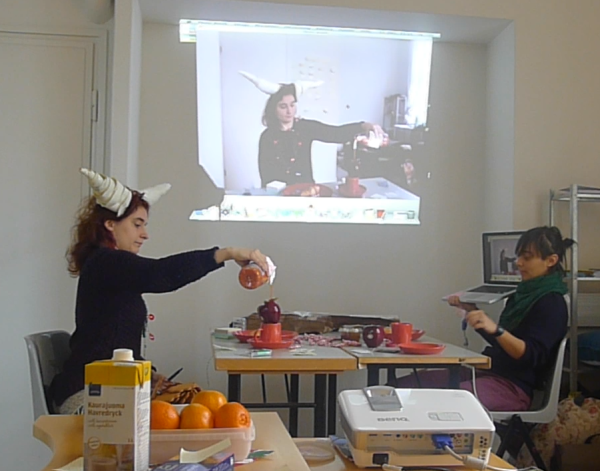 Encounter #4: Mini vlog
On a very special occasion the Minotaur visited my room and left a video message. In this video I am trying to make some sense out of what he was trying to say.

If I happen to have more encounters with the Minotaur, I will let you know!